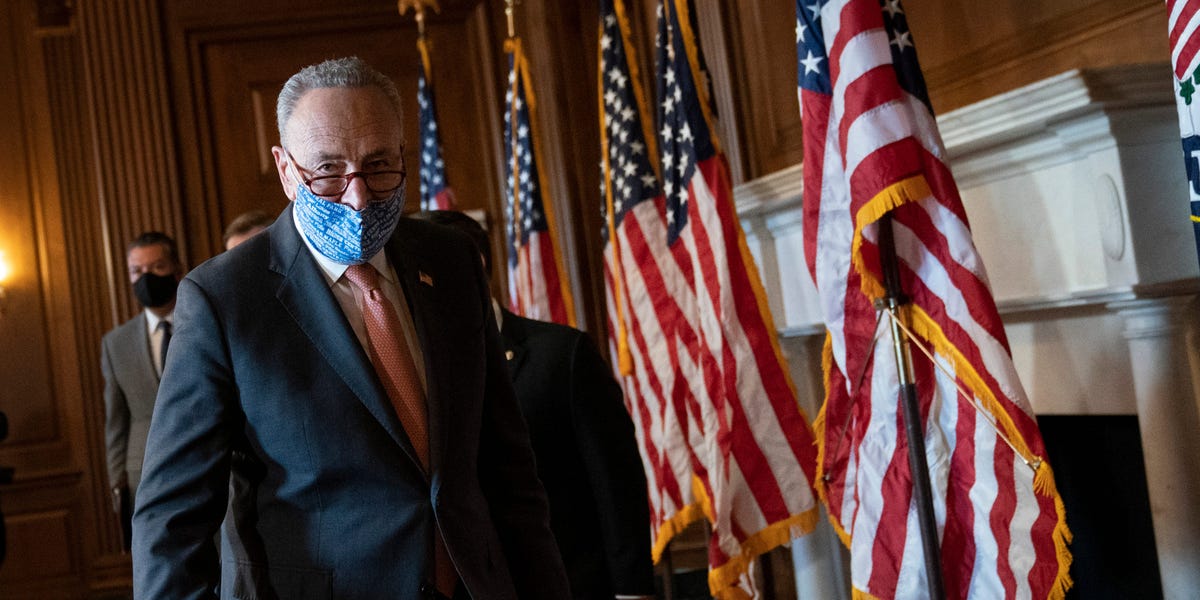 “Time is of the essence,” the Senate majority leader said.

Democrats are eyeing swift action to combat the pandemic as odds of Republican support for Biden’s proposal appears to be narrowing.

Senate Majority Leader Chuck Schumer said on Tuesday that Democrats may kickstart the reconciliation process next week as odds of Republican support for President Joe Biden’s $1.9 trillion emergency spending package appeared very slim. Using the maneuver would allow Democrats to pass the proposal unilaterally with only 51 votes and avoid the 60-vote supermajority required for most legislation.

Schumer said Democratic senators can expect a floor vote on a budget resolution as early as next week — the first step to setting the procedure in motion.”We want to work with our Republican colleagues to advance this legislation in a bipartisan way,” the New York Democrat told reporters at a press conference. “But the work must move forward — preferably with our Republican colleagues, but without them if we must.

Time is of the essence.”Over the past week, Biden has been courting centrist Republicans to draw 10 votes for his large relief plan. It includes $1,400 stimulus checks, federal unemployment benefits, and aid to state and local governments among other provisions. A top economic advisor for the administration consulted with a bipartisan group of lawmakers on Sunday.

But GOP resistance to his plan is intensifying and many Republicans argue the level of spending Biden seeks isn’t necessary to address the crisis. Instead, they favor a smaller rescue package that prioritizes measures like vaccine funds.Senate Minority Leader Mitch McConnell said during a floor speech on Monday the Biden plan “misses the mark.”

“Any further action should be smart and targeted, not just an imprecise deluge of borrowed money that would direct huge sums toward those who don’t need it,” the Kentucky Republican said.Biden said Monday he is willing to negotiate for several more weeks in a bid towards the bipartisanship he campaigned on. He also expressed a willingness to modify the income thresholds for a third wave of stimulus checks — a key demand among some centrist Republicans.

He referred to March 14 — the end date for many enhanced unemployment insurance programs — as a deadline for legislative action.”We’re facing a national emergency with COVID-19 and the economy,” he told reporters on Capitol Hill. “We’ve got to move quickly. The president believes that this is a high priority and I agree.”

That was echoed by Sen. Bernie Sanders, the incoming chair of the Senate Budget Committee. He is set to oversee the reconciliation process in the Senate and has pressed for significant spending to combat the pandemic.

“I think there is a consensus. If Republicans are not prepared to come on board, that’s fine. We’re not going to wait,” Sanders told reporters on Capitol Hill. “We’re going forward soon and aggressively.”

It indicates an expandable section or menu, or sometimes previous / next navigation options.

There is just something awesome and inspiring about being able to take the latest technology and best industry practices and put them to work helping  small business owners level the playing field, truly compete and take their  ideas and visions and convert them into real-world functioning things..